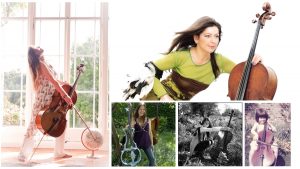 Emily is thrilled to be returning to the wonderful country house venue The Hill,  East Bridgford Hill, Nottingham  NG13 8PE Saturday 14th April 7pm to perform her solo production “Out of the Blue & Into the Amazon”

The  exclusive eco events venue has an eclectic mix of Unplugged Events.

Emily brings the Amazon to The Hill East Bridgford hill !

Tickets
She will be performing music from her acclaimed double CD production ‘Out of the Blue & Into the Amazon’
‘Out of the Blue’ is a series of solo pieces for the cello composed by Emily and in performance she utilises looping pedals to recreate them in a live setting.
“Into the Amazon” in this production she has created a backing track of her own field recordings of the  Brazilian rain forest and the Xavante Indians singing traditional songs and prayers. She combines these with her own musical compositions and takes the audience on a musical adventure from dawn to dusk in an Amazonian village with the performance enhanced by projected images.
She will also relate some of her adventures off the beaten track and  how through her ‘Earth Songs’ performance at the first Earth Summit in Brazil in 1992 she was then invited to stay with a chief and his family in a Xavante village in the Mato Grosso of Brazil. Resulting in her founding a registered charity and with periodic visits over a period of four years worked together with the tribal community to design and build a small health centre which twenty years on continues to provide basic health care to isolated communities.

Hat Bar Opens at 6.00pm – Complimentary drink on arrival with a canapé
– Part one of the show at 7.30pm
– Dinner – sit with performer for main course…
– Part two of the show
– Dessert and relax and meet Emily…

In her hands the cello becomes a voice for her personal experiences, her emotions, and her thoughts as she amalgamates in her productions melodies, rhythms and sounds from her field recordings.

Her life in music over a twentyfive year period embraces many aspects of being a professional musician including composer, producer, and performer with both solo & collaborative productions, session musician – studio and on line. She also gives private cello tuition.

As a cellist and composer Emily has adopted an innovative approach to recreating her harmonious pieces in concert  and employs the use of sampling and looping pedals originally designed for guitar.

Review “Her performance is nothing short of inspirational. Clever use of technology allows her to create multi-tracked pieces in a live setting . A consummate musician, she also has a wonderful ability to communicate with her audience, rendering the whole performance as intimate as it is accomplished”….

In 1995 Emily founded the charity ‘Indigenous People’s Cultural Support Trust’  registered charity no: 1050461 which continues to help support initiatives with tribal communities in Brazil and her ongoing support towards the Xavante.