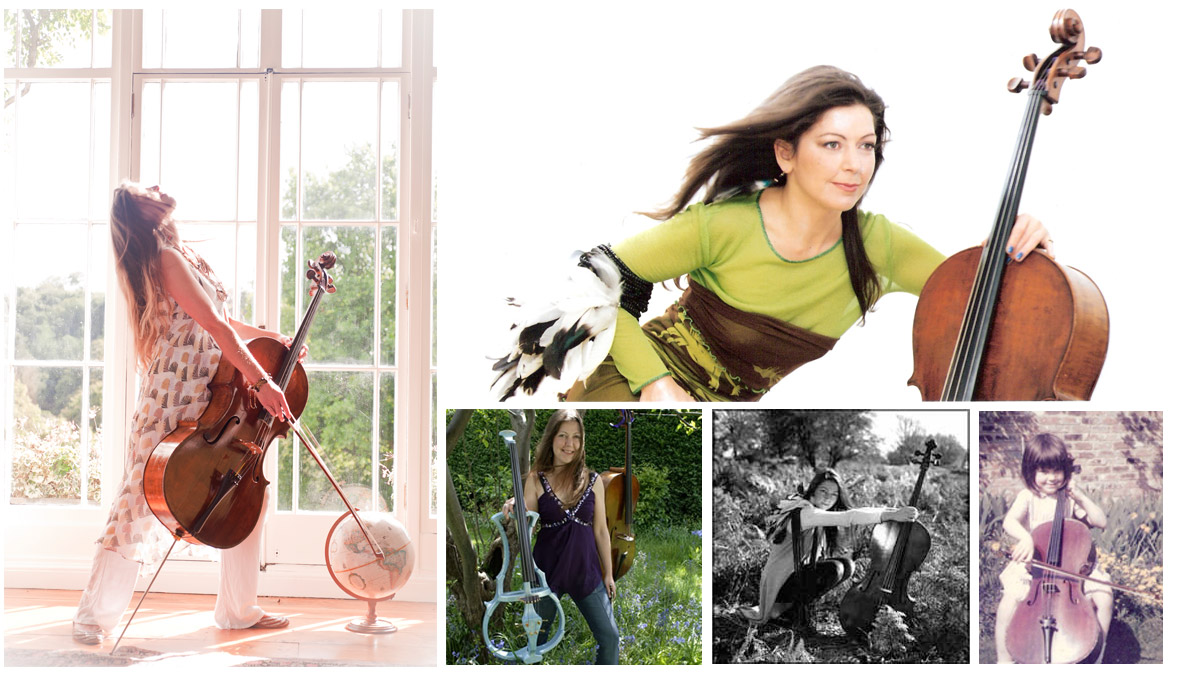 The cello is an incredible resource of sounds and tonal diversification allowing for rich modes of expression.

Through Integrating modern sampling technology with the ‘cello Emily has developed an exciting and innovative program of new music for the cello.

With  looping pedals operated by her feet Emily can play the cello, record harmonies and create multi tracked compositions live.

She uses them not only for performing pre composed pieces but also as a tool in the writing process in her studio to capture in a spontaneous way a sequence of notes.

She delights in performing  and recognises the art of performance as an important role of being a musician. She entertains audiences alike in concert halls, churches, museums, intimate venues of UK rural touring, arboretums and parks, festivals and the ever increasingly popular house concerts. She currently has three productions which tour.

Through employing modern sampling and looping technology, Emily has developed exciting and innovative programs of new music for her solo cello programs “Bach & Music from Out of the Blue”, “From Bach to the Amazon” “Bach by Candlelight” and “Out of the Blue & Into the Amazon”

Her long standing duo with the renowned pedal steel guitarist BJ Cole. Together they produce a dynamic energy that has evolved from their complementary musical perspectives.

As well as recording sessions she is also invited to perform and record within various bands and ensembles and highlights from 2016 included :

‘Cellist in Philip Clemo band ‘Dream Maps’ launch Kings Place, London September 2016 with special guest Arve Henriksen. She is featured ‘cellist on the album and credited with her input in the composition of the track ‘Shadow Seas’.

“Trees as Clocks”
Composed ‘cello to accompany choir compositions by Karen Wimhurst. for the soundtrack of an installation highlighting climate change, a conceptual production by Adrian Newton.

REVIEW: ALL TREES ARE CLOCKS – S/T

03 FEB 2017   “The cello of Emily Burridge reaches, like an outstretched hand, into Newton’s field recording of New Forest National Park. She is an empathetic presence. Her bowed notes arrive slowly as though asking for permission before proceeding, mimicking the branches of the surrounding beechwoods that suspend themselves in the air, moving between spindles of melodic motif and ripples of harmonics. The same is true of Karen Wimhurst’s choral arrangement, which bristles and expands like a breeze shuddering through the leaves…”

Many years experience of recording in studios  enabled Emily to have  her own professional home studio facility which she started in 1992. These days with the use of modern recording programs  she can make high quality recordings of the ‘cello and other instruments and this facilitates online cello recording sessions and the development of recording productions including in the last five years her solo productions, Incandescendo,  the ‘Sombre ‘piano & cello production with pianist Guy Jackson  and a catalogue of library music. Emily favours the industry standard recording program Logic Studio.

As a session musician, Emily commenced working as a session musician in 1987. She is employed either to read a cello part or create the part. Her ability to improvise helped her gain a reputation in the rock and pop genres and  has contributed to numerous recordings playing with the stars of our time as well as lesser known individuals and groups, film scores and advertisements. For details please refer to the  CV page

As a composer and producer she has produced six of her own CDs:

“In the hands of Emily Burridge, this instrument becomes a voice for her personal experiences, her emotions, and her thoughts as she amalgamates a variety of rhythms, sounds, backing performers, and instruments.”

Originally published by a German independent in 1994 and re-released on White Horse World Music label 2004.

Footsteps in the Sand

– was produced after having been awarded a cultural grant which enabled Emily to research folk music in the Northeast of Brazil and employ Brazilian musicians .

– an orchestral work that features the Xavante indian of Brazil singing traditional songs.

Out of the Blue & Into the Amazon

“In her compositions, Emily is capable of gathering, in a truly spontaneous way, elements derived from her Classical upbringing, together with those coming from the ethnic musics she has lived with”

Released December 2017 exclusively on i tunes and on CD. This album is a solo cello recording from Chartres cathedral in France of a live concert (Compositions) and improvisation in various locations within the cathedral (Meditations)‘Emily has developed an original program of new music by operating looping pedals with her feet to record harmonies and create multi-tracked cello compositions live. The result is a wonderfully mellow, atmospheric resonance……The extraordinary spiritual presence of Chartres is exquisitely captured here through Emily’s cello.’ Review by Richard Giles JUNE – JULY 2018 Nexus NEXUS magazine

Extracts of music from all her CD productions is used for film and documentary sound tracks and she also has a catalogue of library music with West 1 music and KPM.

With her improvisational and arranging skills she loves to explore new repertoire and this is currently realised in her collaborations:

with the renowned Pedal Steel guitarist BJ Cole together they have created an eclectic concert program of music including their arrangements of music  by Eric Satie, Purcell, Ravel as well as standards “Cry me a river”

“When they perform established pieces of music they don’t just recite them; their interpretations have the all important extras: poignancy, conviction and weight. Their delicate but powerful duets carry emotions that haunt you. They play with poise enough to take your breath, stop time and speak to you directly.”

The  duo “Incandescendo” create a unique and dynamic sound inspired by both their love of the English countryside and mutual association with Brazil and their concert program includes their arrangements of Brazilian classical and popular music, samba and choros  and an array of new works for cello and guitar and cello  and percussion.

As a composer she is inspired by nature and global events that emotionally move her and this is evident in her CD productions and in the composition of library music in which the imagery of global events makes her play in musical styles reminiscent of diverse parts of the world.

The productive collaboration with pianist & composer Guy Jackson has resulted in the production of the CD “Sombre” and various tracks for sound libraries.

In 2011 she started songwriting in collaboration with the lyricist Scott English and in commencing the melody she has returned to the tradition of manuscript paper and pencil and composes at the piano. She then produces the demo avoiding synthesizers and recording various musicians in the traditional band line up: guitars, keyboards (piano) drums & bass with some string arrangements.

However it is the ‘cello which is Emily’s main tool of musical expression and not content to just interpret the traditional classical works she will continue to seek out and explore and share through musical performance and recordings the experiences of her encounters.

Born in the UK Emily commenced playing the cello at the age of five.

When she entered secondary school she was awarded a scholarship to the specialist music school Wells Cathedral School and then furthered her cello and music studies through a scholarship to the Royal College of Music in London where she was further awarded the Helen Just concerto prize.

She considers herself extremely fortunate to have learnt with some of the best ‘cello teachers; Raphael Wallfisch, Amaryllis Fleming and on leaving the RCM she furthered her studies with William Pleeth.

From a young age she displayed a talent for improvising as well as reading the notes and her ability to improvise has expanded her career as a professional ‘cellist.

Over the years she has carved a niche and developed a reputation for working outside of the usual association with the ‘cello as a classical instrument, she benefited greatly from an intensive and solid grounding in the classical repertoire and her career has also included working within classical orchestras, chamber groups and giving solo classical recitals performing in all the main London concert halls.

In the 1990’s Emily moved by the book ‘Sacred Elephant’ by Heathcote Williams initiated the composition of music to accompany readings and this led to Emily touring the performance and giving guest appearances on radio with the actress Virginia McKenna. Through the production and Virginia’s charity Ele Friends they furthered an awareness of the plight of Elephants.

in 1995 Emily founded the registered charity “Indigenous People’s Cultural Support Trust” no: 1050461 and continues to support various initiatives through the charity.

Her expansive relationship with Brazil commenced with a holiday in 1990 which inspired music for her first CD production “Earth Songs” and then both invitations to perform this production in Brazil and her cultural research in ethnomusicology took Emily to some incredible tribal communities throughout the nineties.

These experiences are integrated into various tracks within her CD productions including “Earth Songs” with some tracks featuring recordings while Emily was guest at the Tribal Gathering ‘92, “Footsteps in the Sand” which has three songs featuring the Tremembe indians of Northeastern Brazil and “Into the Amazon” which features recordings of the Xavante Indians of the Mato Grosso,

It is the Xavante indians though who  Emily became most deeply involved with. A  relationship which commenced in 1992 through her performance of “Earth Songs” at an event associated with the first Earth summit in Rio de Janeiro where she encountered elders of the Xavante indigenous to the Mato Grosso.

An intrepid traveller, she accepted their invitation to visit a Xavante village and travelled alone across Brazil on the buses and then off the beaten track and was guest with a chief and his family in a traditional Xavante dwelling.

Through the charity Emily continues to support various initiatives to aid indigenous communities. For further information please visit the pages on this website  Tribal Voices