Emily, the classically trained virtuoso ‘cellist with a talent for improvisation honed to spontaneous perfection by the demands of top flight session work. With twenty years experience in studios either reading the notes or free improvisation Emily is at home within the recording environment as she is on stage performing. Over the years she has contributed with her cello to hundreds of recordings for songs and sound tracks;
Hear Emily play on a wide variety of songs and tracks by various artists including:
Philip Clemo ‘ Lucy Zirins, Debbie Bonham, George Michael, Roger Daltry, Gianna Nannini, Psychedelic Furs, Chrissy Hynde, Harold Budd, Roger Eno.

With perfect pitch she can identify chordal structures and quickly establish a ‘cello part. She loves to work alongside producers developing ideas and as a composer in her own right she easily adapts to writing string arrangements. 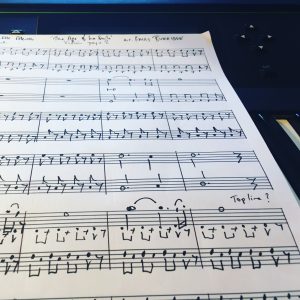 Review of Emily’s contribution as cellist guesting with band from Australia UK tour Summer 2017 & 2018
I travel from Sydney to distant places to tour with my band Fuchsia (fuchsiamusic.com) finding string players wherever I happen to be. The music has some fairly complex arrangements, and is unusual with its own unique psychedelic/folk/rock nuances. Emily was dedicated to getting it right, and she played from the scores provided, playing the parts with flair, style, soul and individuality. She was a pleasure to work with, fun on stage, and I would recommend her to anyone from any genre of music.
Tony Durant (Fuchsia, minitour gigs, London, August 2017) 10/10

Recent achievements include her multitrack ‘cello performance on BAFTA-nominated director Gary Tarne’s acclaimed film “The Prophet” and Terry Flaxton’s new film “To Stand and Stare” where she watched the film and responded with improvised ‘cello.

The piece was designed to complement an exhibition of still photography and video of ancient woodlands undergoing dieback, presented during 2016/17. This Youtube clip presents the video, featuring beech woodlands of the New Forest filmed throughout the year.

As a composer over the past fifteen years Emily has integrated cultural aspects of many Brazilian journeys into her music and CD productions and for Emily the country and people of Brazil have proven to be a deep font of inspiration and emotional memory permeates some of her live productions and musical compositions  including; “Into the Amazon” and her duo Incandescendo

She has three performance productions both solo and collaborative ensembles;

“From Bach to the Amazon”, and “Bach & Music from Out of the Blue”

Reviews:  “fascinating and unique”  – The Musician

“music that is deep, thoughtful and also lifts your spirits”- European Progressive Music

The concert productions “Bach & music from Out of the Blue”and “From Bach to the Amazon”  bring together her classical foundations and her compositional and improvisational abilities. Through employing modern sampling and looping technology, Emily has developed an exciting and innovative program of new music for the cello.

The result is a ‘spellbinding innovative performance’.

Over the last few years Emily has established a strong reputation with her unique solo production touring in the UK and concerts abroad:

Highlights from 2016: “Bach & music from Out of the Blue” Chartres Cathedral France summer concert series.

Their concert program includes an array of completely new works for ‘cello, percussion and guitar and their arrangements of Brazilian Classical and Popular music. Worlds are integrated and superimposed as they combine their many influences creating beautiful, exotic and surprisingly visual soundscapes.

Since their conception in the summer of 2012 concert appearances have Included:

As a  duo they are interested in collaborative work with other instrumentalists joining them.   A successful collaboration  is with 10 string guitarist Marco Campos from Rio de Janeiro, Brazil. who has joined Incandescendo for their June tour for three consecutive years ’13-’15. The concert program then augments to further arrangements of Brazilian classical and popular music

“Duos for pedals steel guitar & ‘cello” Together, BJ Cole and Emily Burridge produce a dynamic energy that has evolved from their complementary musical perspectives.

“Their delicate but powerful duets carry emotions that haunt you. They play with poise enough to take your breath, stop time and speak to you directly.”

The unique combination of Emily’s ‘cello and BJ’s Pedal Steel Guitar create orchestral sounds in a new and refreshing context; weaving around one another in a sinuous dance of infectious sound and rhythm.

In 2011 they released their second album “The Gnossienne Suite” as a digital download.. In 2016 the album was remastered and re-released in 2017

In working together these two have created an eclectic repertoire for their concert program including a classical/jazz interpretation of Henry Purcell’s Dido, “Appalachian Spring” by Aaron Copeland, “Clair de Lune” by Claude Debussy. As well as arrangements of standards including ‘Cry me a River’ by Arthur Hamilton

A writing partnership with the pianist and composer Guy Jackson resulted in “Sombre” currently available for download on i tunes & spotify and also an extensive catalogue of works for library and soundtrack purposes.

Emily as a producer and song writer another collaboration since 2010 was working together with the lyricist the late Scott English in this partnership she is writing and producing songs recorded with the traditional band line up in rock and pop genres.

New release December 2017 “Compositions & Meditations” recorded live in Chartres cathedral, France. This production includes a recording of her solo concert production ‘Out of the Blue’and ‘Meditations’ includes recordings from various locations in the Cathedral.

“Out of the Blue & Into the Amazon” Double CD Recorded in British Grove Studios. ‘Out of the Blue’ is a series of pieces composed by Emily for solo cello utilising looping technology and ‘Into the Amazon ‘ is a twenty-five minute piece  with her field recordings from Brazil of tribal chants and environmental recordings integrated with the cello.

Music from Emily’s CDs is regularly used for film and documentaries and she also has Library Music with the following companies: KPM, Fireworks and West One

Duo with BJ Cole. “Into the Blue” & the digital download release “The Gnossienne Suite”

Co-writes with Austrian producer and guitarist Gandalf as featured ‘cellist and singer on the CD releases:

Fortaleza Various venues as guest appearance with guitarist Manasses and his band including at the Teatro Jose Alencar.