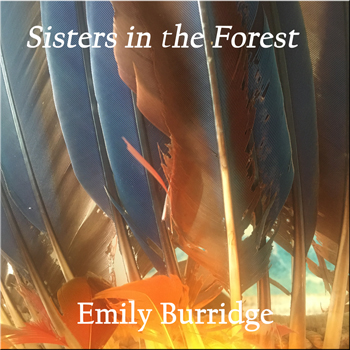 Sisters in the Forest was recorded and mixed by Emily Burridge

The Story Behind The Music

The initiating factor in Emily composing “Sisters in the Forest” was a leaflet received from the campaigning organisation Survival International in which she read about two Awá indigenous women – Jakarewyj and Amakaria – who seven years ago walked out of their Amazon forest home and into the village of settled Awá relatives.

They were among the last 100 Awá in Brazil who have no contact with outsiders and had been on the run for years, desperately evading the “screaming” chainsaws of illegal loggers destroying huge swathes of their forest.

They had seen all their extended family die from diseases and violent attacks at the hands of the invaders.

Seriously ill with flu and tuberculosis caught from the invaders, the sisters were weak and exhausted. After an outcry from allies in Brazil and Survival supporters, Jakarewyj and Amakaria finally received emergency medical treatment and eventually recovered.

They never felt happy in the community and longed to return to their life in the forest.

One day, they left for good covering their tracks so they could not be followed. “Sisters in the Forest” captures the extraordinary resilience of two remarkable women who survived against all odds and refused to give up.

Emily has been performing “Sisters in the Forest” since 2017 as part of her solo cello program and with the invitation to perform at COP26 she developed the production in her studio to the current form and released the single to coincide with her COP26 performance and video presentation.

The video is comprised of astounding photographic images by award winning photographer Sue Cunningham and celebrates the feminine in indigenous tribal communities in the Amazon forest of Brazil.

It combines the professional skills of Emily and Sue and together with Sue’s husband Patrick they are Trustees of the Charitable Trust “Indigenous People’s Cultural Support Trust” which Emily founded in 1995, registered charity no.1050461 through which they work on behalf of and provide aid to indigenous communities in Brazil.

In the face of the alarming rate of deforestation in Brazil Emily has instigated the campaign “TRIBAL TREES” to aid indigenous communities in creating tree nurseries if you would like to join in and help please visit this JustGiving link and maybe share with your friends: https://justgiving.com/campaign/charity-ipcs-tribaltrees

For more information on uncontacted tribes in the Amazon forest of Brazil and the work of Survival international please visit: https://survivalinternational.org/uncontactedtribes

Through integrating modern sampling technology with the ‘cello Emily has developed an exciting and innovative program of new music for the cello.

With looping pedals operated by her feet Emily can play the cello, record harmonies and create multi tracked compositions live.